By Heather Doran October 11, 2011
A few weeks ago Dr Petra (@DrPetra) highlighted a story that was doing the rounds in the national press about 'bossy women have less sex'... Google it under news and you will see the stories from around the globe (see here, safe to click). The story was formulated from a piece of research carried out with Sub-Saharan African Women, (freely available for all to read here)

This extract is taken from the abstract of the research article, 'Understanding how women’s position in the household influences their sexual activity may be an essential piece in protecting the sexual rights of women and helping them to achieve a sexual life that is both safe and pleasurable.' 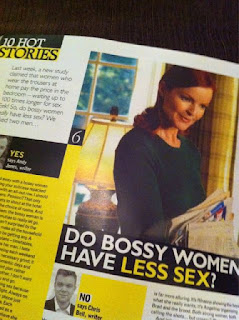 ﻿I tweeted it because I was frustrated, I tweeted it at Grazia and Dr Petra. I was frustrated that a magazine, marketed at women, that aims to go beyond regurgitating the usual trashy gossip that other magazines print, found it appropriate to include a 'debate' about this headline, which should never have been a headline. Another case of misrepresented research.
Others offered their support and said they were disappointed also. I sent an email to Grazia saying why I thought this story was inappropriate and that they could have done a much better job by covering the fact that the mainstream press thought it was appropriate to change this study about empowerment in women in Sub-Saharan Africa into a story about 'bossy women having less sex'.
The response from Grazia:
JaneGRAZIA @hapsci Sorry you feel that way, but that certainly wasn't our intention
DrPetra @ Tbh @janeGRAZIA unsure saying 'it wasn't our intention' to misrepresent research on African women's empowerment is good enough @hapsci

JaneGRAZIA @ @marykmac @hapsci Hard not to react with frustration when accused of misogyny, and for that I apologise. We do take your comments on board

I wrote this blog post because I wanted to share this story with my friends away from Twitter and get their response about a magazine I know they read - what do you think?

Thanks for writing this @hapsci. While Grazia's coverage wasn't the only problematic piece in this whole sorry media saga (which managed to completely twist a piece of research into suggesting the opposite of its actual findings), it is a good illustration of how the media relies on other press coverage rather than original research papers to inform stories. As such it's a great case study for teaching both journalism and science communication students/practitioners.


I may be wrong but it seems Grazia had not read the original research at all and probably had no idea about what it was really about. Again that's not unusual as often journalists misunderstand papers. In this case the research was freely available and easy to track down. The press release was also easily accessible. It would have taken a bit longer to find the original study and report it than it would have taken to simply do churnalism with existing press coverage, but that would have made for a lot more interesting piece. I'd be interested to hear from Grazia (and other journalists who covered this story) about why they did not do this? Or why they felt talking about the press coverage rather than the research itself was adequate?

Following the discussion on Twitter Grazia asked for people to get in touch. For the purposes of transparency here's the message I sent them:

"Following the discussions about the 'bossy women have less sex' here's a few resources that may be of use to you if you plan on taking this story further.

and the press release that went with it here: http://www.jhsph.edu/publichealthnews/press_releases/2011/hindin_sexual_autonomy.html

As you can see neither of these go with the 'bossy woman' angle. In fact what the study set out to do was see how much autonomy women had within their lives and from that looked at sexual activity. They found that women who have more say over what happens elsewhere in their lives are less likely to be coerced into unwanted sexual behaviour. So rather than it being a case of 'bossy women having less sex', the study found that women who have control over their lives have more equal relationships. This is important as equality in relationships translates to more pleasurable sex for women and their partners. It's also very important given the context of this study was Sub Saharan Africa where there can be problems of gender equality and where coercive sex can be a problem. As talking about sex is often taboo, having a way to discuss relationships based on women's wider autonomy in the home could be a helpful means to uncover problems of coercion/violence but also be a way of looking at achieving gender equality and empowering women more widely.

When this research hit the headlines it got respun into 'bossy women have less sex' (summarised here by The Media Blog http://themediablog.typepad.com/the-media-blog/2011/09/daily-mail-issues-sex-warning-to-bossy-women.html). It's not clear why this happened, or where this angle originally came from. But if you compare this coverage to the original paper it's not just a case of getting the science a little bit wrong, it's an entire rewrite of the findings to basically advocate for the opposite position that the research is coming from. Resulting in reporting of this research that airbrushed out African women entirely while repackaging a study about women's agency into a stick to beat UK women with - for being both opinionated and withholding sex. A study that was looking at avoiding coercive sexual practices was transformed into coverage that implied saying when you don't (or do) want sex is a bad thing.

At the time of this reporting people were complaining about how badly the research had been covered, but it didn't stop it being picked up in other media outlets (including your own) in ways that rehearsed or added to the myth of the 'bossy women have less sex' account. Which is why there has been some vocal criticism about the coverage in Grazia.

I'm really glad you're taking time to reflect on this particular case and hope it can be something that could be used in future. Perhaps either as a timely warning that a research report in mainstream media always needs checking at source, or if you wanted to revisit the study to write up what was found (and perhaps interview the researchers who did the study), or to use the main outcomes from the study to discuss how women who have greater autonomy may enjoy more pleasurable sex lives - and how that might be achieved. UK women also can struggle in this area so it could become a sex positive piece about enjoying greater intimacy without rehearsing the usual misinformation about great sex being measured simply on how often you do it. I'd be happy to help out if you wanted to take this forward at all. And if you are writing about research in future and aren't sure about a study (or can't find an original paper) please do ask as if I can't help interpret it I'll usually know someone who can. Most academics working in this area want to help as much as we can to ensure interesting research hits the headlines in fun and empowering ways (that are also accurate)".

They've replied thanking me for my response and restating they were debating the coverage of the story as it appeared in the press, but they'd discuss it at their next meeting and as they're always looking for people to help with features would I be willing to provide quotes for future pieces. I've replied saying this is fine as I'm always happy to help journalists where I can.

In my experience with other cases like this journalists often seek to placate critics by seeming like they'll improve future pieces, but usually are just hoping the pesky scientists will go away and have no intention to alter practice. Time will tell if Grazia truly intends to sort out content and use original research to create fantastic coverage. I hope they do, and I'd be interested in hearing from them or any other journalist who could reflect on what happened here and how this could be moved forward positively.

Disclaimer: I wrote an advice column for Grazia for a while after launch and helped with content ideas for the early issues. More recently I've provided quotes for features.
bossy women have less sex grazia magazine misrepresented research science communication