By Heather Doran January 11, 2011
In a shared house or flat, notes are often left to pass on information, claim ownership, or discourage others from eating your food (see I Lick My Cheese, a brilliant book). In a communal lab, notes are also left to offer instructions as to how the lab should run, pass on info, claim ownership and discourage others from nicking your stuff.

I use a communal tissue culture lab where most people use the lab for limited amounts of time (30mins or so) to culture their cells and then they go elsewhere to do their experiments. My experiments involve me spending longer periods of time in the tissue culture hood (HOURS). On my own. It is mind numbingly boring. So we introduced a radio. A lot of labs have radios, this is not unusual (the lab next door has a radio, usually on so loud that we can hear the bass thudding through the wall, 'the party lab').

The radio was in the lab for a couple of days, when, out of no-where, without any warning, THIS APPEARED. 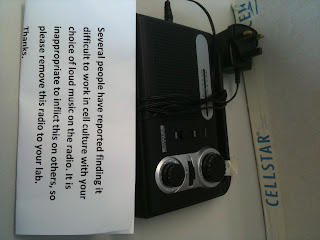 Firstly, it was not MY CHOICE of music, it was the local radio station, which is RUBBISH admittedly but there is very limited radio reception with a £5 radio from the tissue culture lab. Secondly, NO ONE had mentioned that they found the radio too loud or wanted to turn it off. I had seen others using the radio when I was not in the lab. Thirdly, the note was anonymous which annoyed me greatly. Why leave an anonymous note? It makes it impossible to discuss the issue and reach a compromise agreement.

So, I posted a reply, 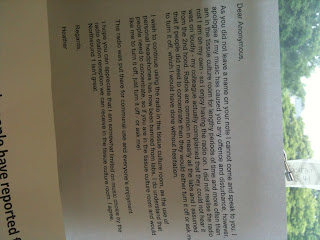 This note went up in the morning, by the afternoon it had vanished. No response. We continued to use the radio. Two weeks later, this happened... 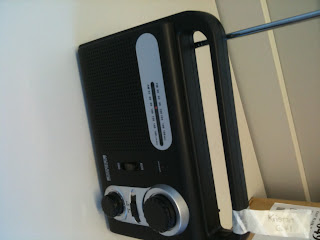 Oh look, it is the radio. WITHOUT A POWER CORD. SOMEONE TOOK THE POWER CORD!!! We are a few months on now, there is still no sign of the power cord or the mystery note poster.... for a bunch of adults to behave in this way (there were no undergrad students around at the time) is absolutely ridiculous. I am pretty sure that this is not an isolated experience. Working in a lab can be like living with people at times (who forgot to do their washing up?!) Please share any stories you have that are along these lines!  For further amusement I am posting these notes, which are also found in that same lab.

To the Enthusiastic Chloros user - 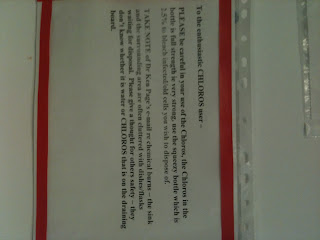 There really are NO PRIZES in this lab: 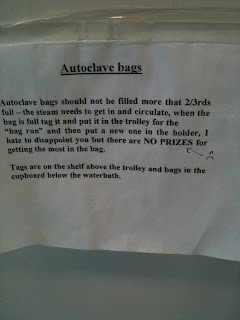 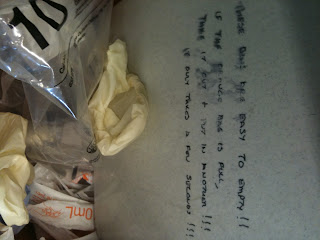