Showing posts with the label science blogs
Show All

Can Research Groups communicate as a collective rather than as individuals? Image courtesy of  jscreationzs  at FreeDigitalPhotos.net I'm speaking to more and more research groups about how they can get online and share their work via social media. I used some of the thoughts and diagrams from 'An introduction to social media for Scientists' published in PLOS Biology 2013 to illustrate some of the thoughts, barriers and journeys to engaging online in a short talk I gave.. I'm looking to speak to more people and read more case studies about how collective research groups have shared their science openly online - rather than the science being communicated by single individuals -  which I see to be more commonplace. Research rarely exists in isolation so I see more groups moving to this collated model. Communicating as a group is, in theory, easier than as a single entity as there is potentially more to discuss and potentially less onus on one individual to provide all the narrative. That said, it is more difficult for people to com
Post a Comment
Read more 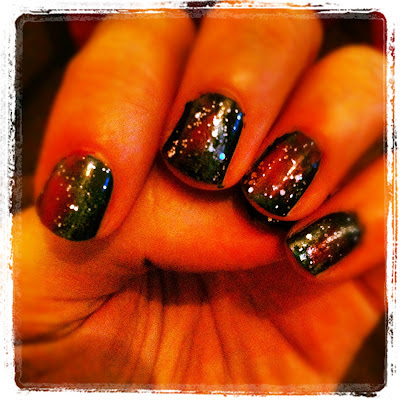 What makes a PhD Thesis? 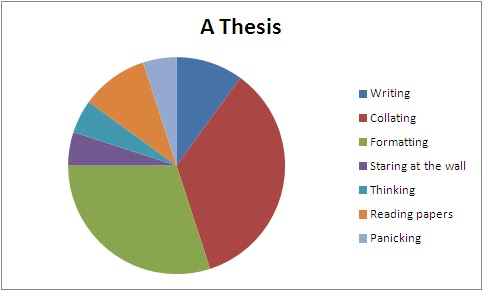 *warning* this is a self-indulgent blog post. I am suffering from a large bout of PhD thesis 'tunnel vision'. All I can think about at the moment is the massive amount of work I have to do in such a short space of time. When you have three years of work, a computer full of data and a head full of thoughts and ideas... where do you start? The worry of unemployment also likes to creep in... I don't have a job lined up for when I finish (yet, but there are some things in the pipeline). My aim is to be mostly finished by October. My last payment from my PhD will be in August. My brain starts panicking about all of these things at random times throughout the day, and then I can't get anything done. It took me ages to get writing. I had a plan, but I still found it completely overwhelming.  I'm usually someone that forms a plan quickly and then gets going and I wasn't. So I started getting stressed about that. The hard work has been done already. I know I h
12 comments
Read more

the life of science

By Heather Doran July 20, 2011
I have been talking to friends and others about careers in science. This started me wondering about a science career. The vast majority of people I have spoken to have had to move for postdocs and jobs. Do you have to be a nomad for a few years before you can 'settle' (and even then you might be required to uproot yourself and move at the drop of a hat) to have a career in science? Is the only way to get a 'good' career to be prepared to go wherever the wind takes you? And how many other careers require that kind of flexibility? Is it unusual? To have a good career in anything do you need to be prepared do down tools and move on (but is it 'unusual' in other careers, whereas in science it is more the norm)? I am not talking about 6/8 months away at a time. I am talking years. If it is, this sounds like a perfect career for me. I love change. I thrive off it. I love meeting new people and seeing different places (no matter where it is). But can I do it? I am in
5 comments
Read more

By Heather Doran January 16, 2011
I am compiling a list of interesting skeptic people/events/blogs to post on the Aberdeen Skeptics in The Pub Facebook site. I am giving a talk about other Skeptic groups, activism and the role of Skeptics in The Pub (if there is one) for our next event .  A lot of the people that come to Aberdeen Skeptics in the Pub are not on Twitter and I wanted to give out a list of skeptics 'things'. This is what I have so far - please help me grow the list! The Skeptic Guide: www.skeptic.org.uk Home of The Skeptic (magazine), blog, skeptic news & events (lists all Skeptics in the Pubs in the UK and abroad) Scotland: There are Skeptic events in Dundee ( http://dundee.skepticsinthepub.org/ ), Glasgow ( http://glasgow.skepticsinthepub.org/ ) and Edinburgh ( http://edinburgh.skepticsinthepub.org/ / also http://www.thetwentyfirstfloor.com/ for independent skeptical news and commentary in Scotland. Aberdeen Skeptics in The Pub - Follow the Facebook page for events and news. Twi
6 comments
Read more

Legal highs have been splashed all over the news recently, but what are they? Are they actually legal? Does that mean they are safe? The expression ‘legal highs’ is not a new term, all it means is that the active compound in the drugs is not a controlled substance. Les Iverson, a retired pharmacology professor and chairman for the Government Advisory Council on the misuse of drugs recently presented a lecture titled, ‘Can we control legal highs?’ at the University of Aberdeen for the opening of the new Kosterlitz research centre. His definition for ‘Legal highs’ was, “[they are] defined as psychoactive substances obtained legally or by diversion from medical use [they], are not a new phenomenon. We are all aware of solvent misuse, nitrous oxide, party poppers and 'magic mushrooms'”. The new wave of ‘Legal highs’ that have been plastered across the media over the past few months are mostly based on mimicking the effects of well known illegal drugs such as ecstasy. Some are h
2 comments
Read more

By Heather Doran September 09, 2010
This blog post will be of no interest to people not actively involved in science communication. It is not accessible for people 'outside' of the science communication scene and for that reason I was reluctant to write it, it is also a rather grumpy post, but there were some things I just felt I had to get off my chest. I stumbled upon  what is known as 'Science Communication' through my interest and love of science & talking & writing. I love sharing ideas and thoughts and meeting new people so I have become actively involved in 'communicating science'. I have communicated to school children, fellow students & strangers. The people I have spoken to have been interested in what I have had to say. I started this blog because it seemed like a fun thing to do in between waiting for experiments to finish. I get annoyed with news articles that do not present data/facts & research correctly. I read BadScience and LOVED IT. I even joined Twitter (after
12 comments
Read more
More posts